You’re a bunch of winkers!

Good day to you one and all. Welcome to that which is, or will henceforth, be, known as Winking Friday. Get your best winks at the ready.

To be perfectly honest, we’re not going to be fussy this week. You can wink away your Friday in any of a number of ways:

- You can hold a tiddly winks competition. This could, of course, either be the traditional flicking of plastic discs… or a straight forward comparison to see whose winkie is smaller.
- You can arouse all sorts of suspicion by constantly winking at people. It is preferable to use one of your two face-based eyes rather than anything else.
- You could go to the city of Wink in Texas (seriously, whoever came up with that name needs special treatment for their special needs).
- You could have a short sleep or “40 winks” as my grandma calls it for some reason.

i) Ensure both your eyes are open first. You’ll know this is the case if you are able to see things. If you can’t see anything you may have gone blind. Please consult a doctor in instances such as this.
ii) In your mind select an eye to wink with. If you are winking at a person on your right, use your right eye. If they are on your left, then use your left eye. If neither right nor left – but in the middle then use your own personal judgement. Under no circumstances perform a double wink.
iii) Close the selected eye in an exaggerated way. You may also consider nodding your head towards the person you’re winking at. This will attract their attention.
iv) Lastly and not leastly, please don’t forget to reopen your eye. It simply won’t count as a wink otherwise, and you’ll feel rubbish having to walk around the rest of the day with one eye closed.

The It’s a Friday team are both going to wink ourselves silly today – and we’d absolutely love it if you did too.

Seriously it is. Matt remembers singing it all night once
whilst in a tent on a cub camp. It reduced one boy to tears.
They were literally coming out of his face. He begged for
Matt to stop. Matt wouldn’t.

Anyway, today we want you to self-regulate all those sill or
inappropriate things that you say and do all the time (well,
we do anyway). Basically every time you say something “wrong”
you must punish yourself with a period of enforced silence.

For example say you were to discuss the merits (or otherwise)
of having a “back, crack and sack” you would need to remain
silent for 2 minutes. Equally comparing boobs to marshmallows
would suffer a similar penalty. A detailed, if fictional,
account of “@nal bleaching” would be worth at least 5 minutes.
Basically being rude at all equals at least a two minute
silence penalty.

Facials are okay. That is, while being silent, nodding,
smirking, raising your eye brows acceptable.

We fully expect to have a pretty quiet evening, having one
colossally offensive discussion in the next half hour and
then not speaking for the rest of the night.

Aren’t similes great? They are!

Anyway the point is that today we want everyone in the world
(yes, that is ambitious, but almost certainly possible) to use
as many similes and metaphors as possible. It doesn’t matter
whether they are appropriate or not. In fact the more
irrelevant the better. We want you to be like a full page
advert for crowbarring a simile into a sentence; a towering
monument to the meaningless metaphor.

Perhaps exclaim to a chum who’s been visiting Mrs Booze that
they are “drunk as a lord”. Or why not tell someone you fancy
that their presence shines like a beacon of loveliness matched
only by heaven itself.

Where possible do try (we accept that it may not always be
possible) avoid likening people to dogs, terrorists or hippos.
It probably won’t ingratiate you to them and they may get as
annoyed as a gorilla that’s been poked in the (back) bottom
with a stick.

If you’re lazy like a sloth, here are a few similes and
metaphors you can try to slip into your conversations/emails/
meetings with important people:

- That potato is a perfect oval, like a circle that’s been
gently compressed by a Thigh Master.

- My brain is an ideas power-station at the minute (but with
less pollution).

- Blimey, you’re as tall as a six-foot-four-inch tree.

- That sandwich is a full grown, hulking, cheese-monster.

- That idea is as lame as a duck. Not a metaphorical lame
duck, a real duck that is actually lame, perhaps from
stepping on a land mine or something.

Can you do better? Email us any classics you slip into
conversation today and there will be a prize for the winner.

Just one more thing - you should read this Letter To The
Terrorists: http://www.lnreview.co.uk/news/005167.php

This is what we'd have liked to have said last week if we'd
had time to write something proper!  ¶ 3:12 pm

Hello. We hope everyone is okay etc.

Not all It’s A Friday readers are in London but a good
proportion are.

Obviously things have been a bit special here in London for
the last 36 hours.

Well... to be perfectly honest instead of working through
countless drafts of today’s Friday email, we went to the pub
at 1pm yesterday and didn’t leave until midnight. We thought
that the best response to the bombs was to carry on with life
as normal. For us that meant going for a drink – the only
concession we allowed ourselves was to get there earlier than
normal.

Anyway. Rather than add to the vast amounts of guff (and
some sensible commentary) being said and written about
yesterdays events we thought we’d just recycle what Mr
Mayor said on Thursday morning.

Normal service will be fully resumed next week.

“This was not a terrorist attack against the mighty and the
powerful. It was not aimed at Presidents or Prime Ministers.
It was aimed at ordinary, working-class Londoners, black and
white, Muslim and Christian, Hindu and Jew, young and old.
It was an indiscriminate attempt to slaughter, irrespective
of any considerations for age, for class, for religion, or
whatever.

That isn't an ideology, it isn't even a perverted faith - it
is just an indiscriminate attempt at mass murder and we know
what the objective is. They seek to divide Londoners. They seek
to turn Londoners against each other. I said yesterday to the
International Olympic Committee, that the city of London is
the greatest in the world, because everybody lives side by side
in harmony. Londoners will not be divided by this cowardly
attack. They will stand together in solidarity alongside those
who have been injured and those who have been bereaved and that
is why I'm proud to be the mayor of that city."

Blimey, Wimbledon’s on isn’t it – and we’ve not mentioned it
once.

Seriously we have been itching (not due to any sort of rash)
to make a gag about “new balls please” for almost two weeks
now. Mind you, if we’re being honest the reason we haven’t
mentioned Wimbledon before is because it is so dull. In fact
it’s guff.

Flipping Cliff Richard singing songs and fat people watching
tennis on Henman’s Hill (or Even-though-British-tennis-
-players-are-rubbish-people-still- sit-and-watch-them-on-a-
-big-screen Mound). That said, if we can come onto women’s
tennis for a minute, there really is nothing better than
watching girls work up a sweat and pant and grunt. A lot.

But, woops, we’ve digressed (ed. – I think it was wrong from
the start). Today we are celebrating those infamous creatures
that pick things up on Wimbledon Common. We know what you’re
thinking and it only happened once and it was an accident.
The bloke’s belt had broke causing an embarrassing trouser
droppage. And he chocked, which accounts for the Heimlich
manoeuvre.

Anyway today is Womble Friday. You know – those big-snouted,
furry critters who “pick up the mess other people leave
behind”. (LEAVE IT).

As a concept The Wombles TV show was a work of genius. It
worked on two levels: pure entertainment (like the episode
where it was windy and the Wombles kept picking up litter,
putting it in the bin, only to see it blow away again, ran
after it and picked it up again but it blew away again...
and then it happened again until one of the Wombles suggested
putting a lid on the bin and that worked - classic episode)
and, of course, there’s the social impact of the Wombles.

Wombles picked up litter and were cool. Suddenly putting
stuff in bins was cool and everyone did it! (ed. - did they?)
(sub-ed. - yes). So in a way, the Wombles cleaned up Britain.

And of course let’s not forgot the Wombles album. Utterly
brilliant. Seriously, buy it.


So how can you be like a Womble today?

i) When smoking ensure the fag is pointing downwards. You
will end the evening with very yellow, Womble like fingers.

ii) Pick stuff up and put it in the bin. (ensuring, where
appropriate, you have selected the correct recycling bin
option.)

iii) Grow fur all over your body, and a huge snout. If
necessary buy a snout from a joke shop… or a tobacconists.

iv) Sing “Underground, over ground, Wombling free” loudly in
the toilet at least once. Get other people in the toilet to
join in (with the singing).

v) Go to Wimbledon and walk on the common.

vi) Watch Wimbledon – the movie. It’s not great but it’s got
Kirsten Dunst in the shower!

vii) Do none of the above, because they’re such rubbish ideas
(Ahhhhhh. Do you see what we’ve done there?!)


And that's it. Have a good Friday... and remember: you’re a
womble! 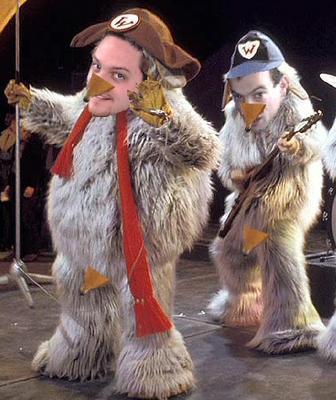